As soon as I noticed that Abaddon Books were hosting another open door, I knew exactly what to do. I had a sure-fire stellar pitch already prepped and good to go.

There would be zombies, and Nazis, and Nazis fighting zombies, and Soviet Special Forces battling Nazis, zombies and, yes, Nazi-zombies. All of this whilst our heroes infiltrate underground bunkers of eldritch Egyptian magic and delve into dungeons of dark betrayal. Maybe there'd be a plucky upper-crust British officer sort—isn't there always?—keen to Do His Bit in the war against the undead masses of the Last Reich. I'd probably also need a hard-eyed Mademoiselle from La Résistance, seeking vengeance for a (mostly) dead family in war-torn France. In essence, though, we're talking endless, tireless ranks of brain munching shamblers.

I'd tried something similar for a previous Abaddon send-us-all-your-pitches event, and it hadn't gone over terribly well. Not well at all. Soul crushing rejection is how I'd describe it, although I'm sure they were perfectly pleasant about it at the time. It still hurts though.

So, anyway, I'm thinking maybe not so utterly zombie, this go around? That might be a wise idea, yeah? Time for something new, I thought, or a fresh look over something old.

Short history lesson: Back when Shaun of the Dead and Hot Fuzz first hit the cinema screens, I'd had the notion that it would be great to see this sort of Spaced-style keen-but-slightly-hapless bunch of characters engaged in a fight for survival against an invading alien horde. I already had a title, didn't I? Midnight in the Garden Centre of Good & Evil had been floating around in my head for months if not years, and now was surely the time. Unlikely heroes tackle plant monsters in a garden centre. It writes itself!

I'd wanted to do a movie—because scripting, producing, directing, how hard could that be?—and decided that Midnight Garden would be the very thing. I'd be making it local, I'd be doing it low-budget, and you can be damn sure I'd be guilt-tripping every available friend and relative for help.

I was already out-and-about scouting locations (read: spending my Sundays wandering old and run-down garden centres). I'd fixed a solid outline of story on paper and I'd started on a first draft, it was all guns go-go-go.

Edgar Wright and Simon Pegg announced that their next 'Cornetto Trilogy' movie would be about alien invasion and, much as I'd like to have seen my fledging movie as the Deep Impact to their Armageddon, the Volcano to their Dante's Peak, the American Battleships to their Battleship...

The effort I'd put into the project didn't seem to be worth it anymore. To be honest, I'd probably been looking for an excuse to flee from something that was getting out of hand and, given that I'd not yet recruited any cast or crew, this was probably as good a time as any to quit. I was only failing myself, wasn’t I? I'd get over it.

I closed the file, set it to one side and moved on to shorter, easier, things.

Fast forward to the slightly more recent past, and there it was: Abaddon's call to bold adventure and my sudden need for Something Less Zombie.

I dug out my original outline for Midnight in the Garden Centre of Good & Evil, and got back to work.

The rest is not exactly history, but it is a novella from Abaddon Books.

Read the synopsis of Midnight In The Garden Centre Of Good and Evil here:

They’re coming for us! Little grey men, little green women, pod people, tripods, shape-shifting blobs and man-eating plants; they’re in our neighbourhoods, under our beds, invading our minds. It could be your shopkeeper, your boss, your best friend. It could be you...

The mid-twentieth-century ‘alien invasion’ genre of film and fiction, inspired at least as much by Cold War paranoia as by the imagination-firing space race, is a crucial part of our cultural DNA, a hokey, cliché-ridden, daft and undeniably fun slice of genre history. Invaders From Beyond! hopes to capture that fun. A new series of standalone novels (in the vein of the ever-popular Tomes of the Dead), Invaders From Beyond! picks up the conventions of this beloved genre, from Invasion of the Body Snatchers via The Thing, Close Encounters of the Third Kind and V to Mars Attacks!, and pokes holes in the plots, pokes fun at the clichés and pokes the readers in their eye(stalk)s.

*
Miller, fresh from too many pampered years at university, has just managed to lose a PhD, a girlfriend, and her father’s car in one magnificent bender. With parents now committed to a regime of find-your-own-way tough love, he’s fallen off the fast track to success, and finds himself working in a shabby garden centre on the edge of nowhere. The staff are a collection of dropouts and oddballs, the boss is very shady, and Miller’s not sure half the stuff they sell is legal.

Still, he’s learning to get on with things and make do, finding a brand new path through life, but... an alien invasion disguised as a bright and shiny big-box store from out of town? That really isn’t helping.

If Miller wants to protect his job and save the world, he’s going to have to dig deep and get his hands dirty. 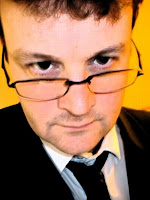 Colin Sinclair is a writer and roleplaying game creator from Northern Ireland. He's written a lot over the years but most of it is boxed up and buried deep where it can't cause trouble.  When he's not forced to work in a dull office job he's writing or reading, and when he's not doing that he's baking bread and thinking "I should be writing". His house has been described as "a library with some beds in it". He lives with his wife, some children, probably a cat.

get you copy here:
Midnight At The Garden Centre Of Good And Evil is out now!
US / UK