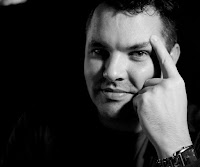 Patrick S. Tomlinson is the son of an ex-hippie psychologist and an ex-cowboy electrician. He lives in Milwaukee, Wisconsin with a menagerie of houseplants in varying levels of health, a Ford Mustang, and a Triumph motorcycle bought specifically to embarrass and infuriate Harley riders.
When not writing sci-fi and fantasy novels and short stories, Patrick is busy developing his other passion for performing stand-up comedy.
You can find Patrick online at his website:www.patrickstomlinson.com, on Twitter@stealthygeek and on Facebook.
-------------------------------------------------------------- 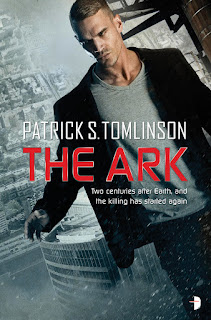 Hi Patrick, welcome over at The Book Plank and for taking your time to answer these few questions for us!

BP: First off, can you give us a short introduction of who Patrick S. Tomlinson is? What are your hobbies, likes and dislikes?
PT: Patrick S. Tomlinson is an author/comedian about yay high who likes to talk about himself in third person. He works out, watches football and baseball, rides motorcycles and drives Mustangs, builds sci-fi models, and argues politics with those not yet fortunate enough to share his views. Oh, and he writes sci-fi novels and says horrible things on stage for money.

BP: You have been writing short stories for a few years now. The Ark is your first full-length book was it difficult to write a full-length story?
PT: The Ark was actually my third book, just the first that someone else thought was as awesome as I did. So I’ve already had some practice with long-form outlining, plotting, etc.

BP: Did you encounter any specific problems when you were writing The Ark?
PT: Very few, actually. It was, as novel writing goes, fairly straightforward and free of stumbling blocks.

BP: What has been your favorite scene, chapter or moment to write about?
PT: There are a couple that really stood out, but Chapter six and seven, during an EVA that goes awry, were really fun action scenes to think through, visualize, and then write out. Also, any scene involving Devorah Feynman, the Museum curator. She was an immensely fun character to write.

BP: What gave you the idea behind The Ark? And how long did it take you to put the thoughts clearly onto paper?
PT: I’ve always been fascinated with the concept of generation ships. One afternoon, I was watching a show on Discovery about the problems and perils of building one. Instead, I started thinking less about the ship and more about the sort of society that would develop onboard it. Who gets on, and what kind of people get off again centuries later? The basic outline of The Ark came to me in a fit of creativity over the course of just a few hours. I wrote the rough draft in six months, which while not nearly as fast as some authors, was still a third the time it took to write my first novel.

BP: If you had to describe The Ark with a single sentence, how would it go?
PT: The Ark is a “Sealed Airlock” murder mystery thriller set onboard a ten-mile long starship.

BP: The Ark is described as Sherlock Holmes meets Space Odyssey. Those are big names. Having your book compared to those must feel good. Does it also put more pressure on your shoulders?
PT: I think the comparisons are very generous. Maybe too much so. I try to keep a realistic view of my work and my own abilities. Otherwise you get ahead of yourself pretty quickly. And my ego doesn’t need any help as it is. No, the pressure I feel comes mostly from within. While I appreciate all of the support, reviews, recommendations, and so forth that I’m getting, they don’t change my opinion of the work, or my desire to do even better on the next project.

BP: The Ark was published earlier this month, if you were given the chance to redact all published books and make one final change, would you do so? If yes, which part would you change and why?
PT: Wow, that’s rough. Like saying, “Your first child was born earlier this month, given the chance, what part of them makes you want to stick them back in the womb until they get it right?” I’d probably say no to going backwards. For one thing, I haven’t touched the book in months already. I’ve written and rewritten the sequel draft in that time. I gave The Ark the best chance I could to be a success. My mind has already moved on to the next several projects. Besides, there’s never ‘One last change.’ Any change I would make would lead to another change, and another. You never really finish perfecting a book, you just run up against your deadline.

BP: The Ark already has one sequel planned, have you already mapped out the events for that book or do you write as you go? Do you have more books in the making?
PT: The immediate sequel is called Trident’s Forge, and it’s all but finished. My editor has already been through it and given me his recommendations for the final rewrite, which I started yesterday. It’s scheduled to come out next April. After Trident’s Forge, I have at least four more books sketched out in the series, should sales of the first two justify a new deal with the publisher. Number four is REALLY cool. I’m excited just by the possibility of writing it.

BP: Do you have any other projects besides the Children of the Dead Earth series that you would like to pursue in the near future?
PT: It’s already happening. The very first novel I wrote was a sci-fi comedy in the tradition of Douglas Adams or Terry Pratchett, two of my biggest literary and comedy influences. It’s titled A Hole in the Fence, and I’ve just finished a massive rewrite of it after four years away. It’s about to go out on submission to editors, and I couldn’t be more excited.

BP: Everyone enjoys science fiction/fantasy in their own way. What do you like most about it?
PT: Hope. The hope of a brighter future, where humanity reaches out and chases after its full potential, both technologically and culturally.

BP: If you had to choose your top 5 favorite books, which would they be?
PT: In no particular order; Speaker for the Dead, Dune, The Hitchhikers Guide to the Galaxy books as a unit, the Discworld books as a unit, Implied Spaces by Walter John Williams.

BP: Can you give us a sneak peek of what will be in store for us in The Ark?
PT: Murder, mayhem, knife fights, and commentary on the modern surveillance state and environmental sustainability, which weren’t planned ahead of time but found their way in regardless.

BP: Thank you very much for your time Patrick and good luck with your future writing!


PT: Thanks for having me.