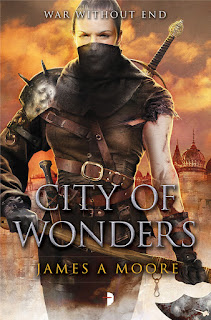 
If you have followed this blog you know that I am a big fan of the Seven Forges series of James A. Moore, having read the first two books and the featured the short stories in my Short Fiction Friday feature. The City of Wonders was released earlier this month and therefore it was time to catch up with James.

Hi James, welcome back to The Book Plank for another interview!

BP: first off can you give us a short introduction as to who James A. Moore is? What are you hobbies likes and dislikes?

JM: Thanks for having me back! Well, to start off, I’m a voracious reader. That is to say I love reading and if I had the time in the day I would read a book a day. As it stands it’s more like a book a week because I have two jobs. Aside from that I occasionally like to sculpt, I like watching TV and I have a full time day job, partially to stop me from becoming a hermit.

JM: I didn’t actually dance and sing to the stars, but I wanted to. I’m delighted that I get to continue the series and work on another series afterward with Angry Robot. Honestly, they are a pleasure to work with.

BP: Epic Fantasy comes in many forms, where do you think that your series draws its strengths from?

JM: I have trouble with the notion that my series has strength. Honestly, I just have a blast writing it. I would hope the characters keep people coming back and I think a lot of the writers who have influenced me color the work I do.

BP: If you would have to describe City of Wonders with a single sentence how would it go?

JM: City of Wonders is the place where all of the carefully placed pieces in my mosaic are finally set in motion.

BP: If you look back on all the three books so far are you pleased with the outcome and possibilities for continuing the series or would you like to change something in the earlier books so that you can build or work something out better in the books to come?

JM: I’m very pleased with what has happened so far, because I have readers who are pleased. But I can always look at my work and find room for improvement. One of my challenges, honestly, is wanting to make sure that the story stays fast-paced without sacrificing any of the storyline. I hope I’ve done well enough, but I think I could always go back and do better.

BP: Can you give the readers a short introduction to Seven Forges and what City of Wonders will have in store for them?

JM: In the series itself I think it’s a wild clash of cultures and a chance to see what it feels like to look upon a new potential enemy and wonder if you have even the slightest chance of surviving.  I have mentioned several places in the past books and they are finally visited in CITY OF WONDERS. The first two stories, to a very real extent, are about expanding the world of Fellein. The Third book is about looking into the expanded territories and watching them burn.

Thank you very much for your time James and good luck with writing more Seven Forges. I look forward to them!

Thank you, my friend!

James A Moore is the author of over twenty novels, including the critically acclaimed Fireworks, Under The Overtree, Blood Red, Deeper, the Serenity Falls trilogy (featuring his recurring anti-hero, Jonathan Crowley) and his most recent novels Alien, Sea of Sorrows as well as Seven Forges series: Seven Forges, The Blasted Lands, City of Wonders  and the forthcoming sequel The Silent Army.
He has twice been nominated for the Bram Stoker Award and spent three years as an officer in the Horror Writers Association, first as Secretary and later as Vice President.
James cut his teeth in the industry writing for Marvel Comics and authoring over twenty role-playing supplements for White Wolf Games, including Berlin by Night, Land of 1,000,000 Dreams and The Get of Fenris tribe. He also penned the White Wolf novels Vampire: House of Secretsand Werewolf: Hellstorm.
Moore’s first short story collection, Slices, sold out before ever seeing print.


He lives in Massachusetts, US. Meet him on his blog and @jamesamoore on Twitter.


BY THE BY: Angry Robot has signed James on for a new trilogy you can read about it here