Guest Blog: Alien Invasion Stories from Armada to Grunt Traitor
By Weston Ochse © 2015
There’s something at once terrifying and romantic about an invasion. One wrong move could mean the destruction of everything you know and love, but in the heat of battle, there are crystalline moments in which true humanity shines. Like many military authors, I often look to history for guidance on how to write the future. I’ve always looked at the Battle of Rorke’s Drift as the perfect sort of battle to represent an alien invasion. One hundred and fifty British soldiers in a remote outpost are beset by four thousand Zulu warriors. The odds seemed impossible, yet in the end the British won the day.

The early Michael Cain movie Zulu retells this story and stands as one of my favorite military movies of all time. There are moments in the film that resonate. In the face of overwhelming attack, the sergeant major lowly commanding his men to take it easy. Right when everything seems lost, several men channeling the ridiculous still complain about having to fight and would rather go on profile. The stoicism of Michael Cain’s character in the face of implacable odds.

There’s so much about this movie and story. But overall what it tells me is that an alien invasion story isn’t about the aliens. It’s about how people react to the aliens. It’s what I say about zombie movies. With few recent exception, zombie movies and books aren’t about the zombies, they’re about the people escaping the zombies. Both zombie attacks and alien invasions are also very much like weather phenomena. An earthquake. A volcanic eruption. A hurricane. They happen, and the story is in how people survive it.

Ernest Cline treated the alien invasion much like this in his recent Armada. Zack Lightman’s humanity shines as he tries to figure out his place the invasion, so clearly Cline got the grok.

The granddaddy of alien invasion stories, H.G. Wells, concentrates his narrative on the reactions of those fleeing in War of the Worlds.

In Niven and Pournelle’s Footfall, it’s the understanding of the aliens and their interactions with humanity that propels the plot forward.

David Gerrold’s War with Chtorr series absolutely concentrates on how humanity reacts to an alien terraformation and presented me with my first look at homosexual relations in science fiction. The narrative surrounding that is so poignant and so perfect, it remains fully formed in my memory.

So when I sat down to write Grunt Life and Grunt Traitor, all of this fueled my senses (except for Armada, which was written after these). I wanted my books to focus on humanity, in my case a slice of humanity scarred with PTSD. In the first book, only the soldiers have PTSD. They are suicidal. They can’t control their emotions. They are as broken as soldiers come. But by the time the events in Grunt Traitor begin to unfold, everyone on the planet has PTSD. My characters began searching for ways to understand the enemy. Because my POV was from a grunt, a low level soldier, this was at times a humorous McGyver-like attempt to overcome a particular aspect of the invading aliens. They just didn’t know any better. Or as my old boss liked to say, they don’t know what they don’t know. Yet still they fight on.

Alien invasion books are the perfect sociological foil for observation. At times, my characters surprised me, doing things I hadn’t intended for them to do, but doing something absolutely in line with their own personalities and duty positions. I began by saying that there is something both terrifying and romantic about an alien invasion. The absolute best thing, the romantic thing that never happens in real life, is that when faced with an external enemy and against overwhelming odds, humankind is forced to toss aside all of their petty hatreds and squabble and become one cohesive defense force. To do otherwise, is to cease to exist. Cline and I use similar language in our books to get this idea across. Sure, it’s pure romance, but then at the end of the world what else is there?


Weston Ochse is the award-winning author of more than twenty novels, including the 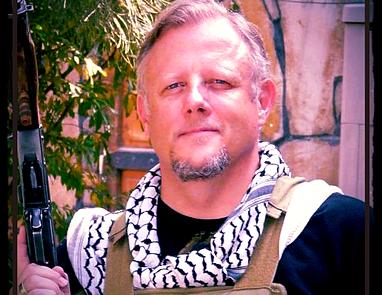 groundbreaking Task Force OMBRA series for Solaris. A military veteran with over thirty years of service who began writing professionally in 1997, Wes has seen his work published in magazines, comics and anthologies. He lives in the Arizona desert, a stone’s throw away from Mexico.

And if you could add the following links on the page somewhere that’d be brilliant:

you can find it online at:
Amazon US
Amazon UK