She currently lives in Edinburgh. She doesn’t own a rescue cat, but if she did his name would be Mr Pickles. 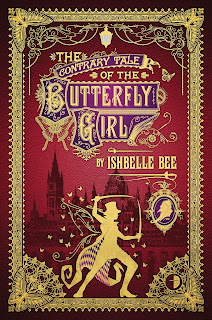 Hi Ishbelle, welcome over at The Book Plank and for taking your time to answer these few questions for us.

BP: First off could you give us a short introduction as to who Ishbelle Bee is? What are you hobbies, likes and dislikes?
IB:   I live in Edinburgh, Scotland and I am half Scottish and half English ( I was born in London). I write adult fairytales infused with horror elements and inspired by folklore and mythology. My hobbies are reading and illustrating. I like cheesecake and  I dislike thoughtless, rude people and tripe.

BP: Mirror and Goliath was your debut. When and where you first decided to write your first story?
IB:  I have been writing since I was very young but MIRROR & GOLIATH I began writing in 2012 while I was working fulltime and it took a year to complete as I was trying to squeeze it in to my free time.

BP: What gave you the idea/inspiration behind the The Peculiar Adventures of John Loveheart?
IB: I love the Victorian period and I was interested in writing a horror/ fairystory  involving Jack the Ripper and exploring the idea of ‘demonic’ possession. I am very interested in quirky characters who are colourful and perplexing with their own little eccentricities and I wanted to incorporate a lot of them into a strange imaginative Victorian London.

BP: Writing a debut is a daunting task. How did you went about and plan writing Mirror and Goliath?
IB: Although I tend to write books fairly fast, MIRROR & GOLIATH was written in tiny sections over the course of a year due to my job at the time. There was no actual plan for the plot- I had an outline in my head, and scenarios I wanted to pursue ( a coffin clock was a particular idea I had in mind). It was frustrating writing the book in small sections but I slowly found my voice whilst it was being created. I was rather self conscious at the beginning but by the end of the book I felt comfortable and at ease with the style and flow of the narrative.

BP: Mirror and Goliath is being compared to big names writers such as Neil Gaimen, what does that mean to you?
IB: I am, of course very flattered by the comparison. Gaiman has a beautiful imagination and I find  his work  wonderfully sensitive and poetic. My favourite works of his are STARDUST, CORALINE  and THE OCEAN AT THE END OF THE LANE. I also love the SANDMAN series.

BP: The second book, The Contrary Tale of the Butterfly Girl, is out this August if you would have to sell the book with a single sentence how would it go?
IB: Marc Gascoigne  the founder of Angry Robot books pitched it  perfectly - ALICE IN WONDERLAND GOES TO HELL

BP: What has been the biggest challenge you have faced when during the writing of the series so far?
IB: The increasing surge of enemies amassing against Mr Loveheart. He really annoys a lot of demonic individuals.

BP: Did you encounter any specific problems during your writing?
IB: The counterbalance between insane characters and sane ones. There are more mad than not, and I have to keep a check that there is a rational voice ( usually a detective ) to keep  the storytelling sane from one perspective.

BP: Besides the problems and difficulties, which chapter, scene or character did you enjoy writing about the most?
IB: Mr Loveheart is the most fun for me to write as I usually have no idea how he will react to a situation ( I don’t think he has any idea). It’s great writing really unpredictable characters because it keeps the storyline fresh and lively.

BP: The Contrary Tale of the Butterfly Girl is your second book in the series, have you already mapped out how many volumes the series will run?
IB: I have so far set out the series to run for 5 books with a Christmas special book and possible sidesteps into other areas.

BP: Next to the The Peculiar Adventures of John Loveheart series, do you have any other projects that you wish to pursue in the near future?
IB: Oh yes- I have  several other fairytale projects I am writing which are also set in the Victorian era/ Georgian period and Medieval period.

BP: Everyone enjoys fantasy in his or her own way. What do you like most about reading and writing fantasy?
IB: The freedom to create my own strange little world and decide the outcomes myself for the characters. It’s especially satisfying with a villain – to make sure they get their just desserts.

BP: If you would have to give your top 5 favourite books, which would they be?
IB: That’s a really difficult question as I have too many favourite books but I will give it a go-

BP: And just lastly, can you tell us a bit more of what might be in store for the readers of The Contrary Tale of the Butterfly Girl and a possible teaser of what’s might to come?
IB:  In book 2 Rufus Hazard gets to brandish a machete and Mr Loveheart gifts Walnut a handgrenade which comes in use.
As for what’s to come – Mr Loveheart will be visiting New York in a future book

BP: Thank you for your time Ishbelle and good luck with your future writing!