Guest Blog: On Creating the Weir

On Creating the Weir by Jay Posey

If you’ve read any of the Legends of the Duskwalker trilogy, you’ve bumped into the Weir; the glowy-blue-eyed fiends that wander the Open wastes of the Duskwalker world at night, harvesting anyone unlucky enough to be caught outside when the sun goes down. If you haven’t read the books, thinking of the Weir as (fast) cybernetic zombies is a pretty good starting point. But it would be a mistake to think that’s all there is to them.

I wouldn’t blame you, of course, because that’s pretty much what I thought about them at first too. I met them about the same time readers did, which was in the Prologue of Three, the first novel in the trilogy. When I started writing that scene, I knew it was a bad idea in the Duskwalker world to be outside when the sun went down, but I didn’t know exactly why. I just knew there was Something Out There.

When the Weir showed up, they were a terrifying mystery. There was no doubt they were the Something Out There, but I had no idea where they’d come from or what they wanted.

That, in fact, was part of what made them so frightening. There’s no way to appease them, no way to negotiate, nothing that you can offer them to make them go away. When they show up, you fight or you die. (And actually, it’s worse than that … you don’t die, you get taken away and converted into one of Them.)

And as I started fleshing out my characters, I came to realize that many of the inhabitants of the Duskwalker world didn’t have any more answers than I did as to what the Weir were or what they were after. That knowledge had been lost in the collapse, many years earlier.

But I knew there was more to the story of the Weir than just “mysterious cybernetic zombie”. I just didn’t know what that More was, until I saw it through the eyes of one of my characters. In one scene, a character sees an old friend, now converted into a Weir. And though most Weir behave more like pack animals, this one was clearly at war with itself; trying to return home, against its new programming.

That moment revealed an entirely new side of the Weir to me, and I knew I was on to something. More than that, I know I was on to THE something; the something More I had intuitively known was there long before my conscious writer brain had figured it out.

Once that moment opened the door, though, the Weir became a different creation to me. They were still terrifying, of course, but I also found myself pitying them. And I as explored them more deeply, I discovered their history, and what they’d been created to do, and why. And though I don’t reveal that full history in the current trilogy, I suspect one of these days it’s a story I’ll have to tell.

But the most interesting thing to me about the whole story of the Weir is just how much it taught me that creation feels more like discovery than I’d ever previously imagined. It’s a weird sensation. I know I wrote these books, and I know I made the Weir up. But as I wrote and did my best to make the Weir more than just scary monsters, it came to feel less like I was creating them and more like I was uncovering a mystery that had existed in the Duskwalker world before I ever arrived.

With the release of my latest book Dawnbreaker, the Legends of the Duskwalker trilogy comes to a close. But with so much of the world still unexplored, I can’t help but think there are many more stories to be told. 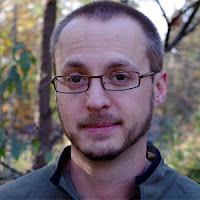 Jay is a narrative designer, author, and screenwriter by trade. He started working in the video game industry in 1998, and has been writing professionally for over a decade. Currently employed as Senior Narrative Designer at Red Storm Entertainment, he’s spent around eight years writing and designing for Tom Clancy’s award-winning Ghost Recon and Rainbow Sixfranchises.
A contributing author to the book Professional Techniques for Video Game Writing, Jay has lectured at conferences, colleges, and universities, on topics ranging from basic creative writing skills to advanced material specific to the video game industry.
You can find him online at his website, jayposey.com, as well as on Twitter (@HiJayPosey).