Last year Marianne de Pierres' Peacemaker was released by Angry Robot. Which proved to be a very interesting crossover story, it had the science fiction promises of megacities and flying cars, contrasting to that there was a "bush" and western feel to the story. This all gave a very unique sense to the story. Better even was how well these elements worked and the story that Marianne de Pierres told in Peacemaker.

For more detail on Peacemaker you can read my review here

Below I have some very cool new for you! The cover to the sequel of Peacemaker which is called Mythmaker. Feast your eyes on what Joey HiFi once again did!

You can find out more information on the amazing Joey HiFi and all the amazing covers he did on this website: http://www.alexandersband.com/joey-hifi 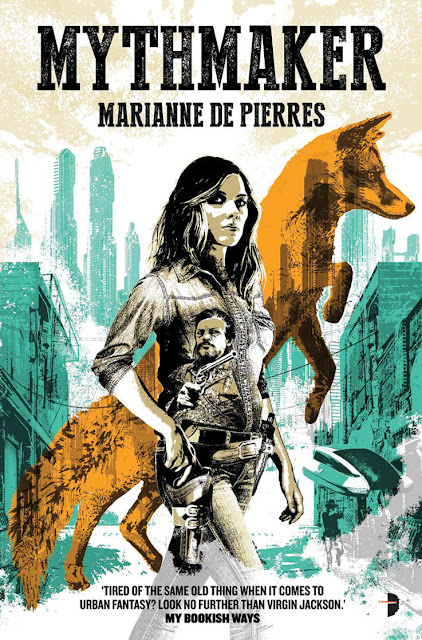 Quote:
Marianne - “Joey HiFi has captured the essence of the MYTHMAKER story in his cover. The fox is a surprise spiritual guide to one of the characters, the urban background foreshadows trouble in Mystere, and the man on Virgin’s shirt is Papa Brise. It’s a brilliant interpretation of events. I think I like it even more that the PEACEMAKER cover.”

Virgin’s in a tight spot. A murder rap hangs over her head and isn’t likely to go away unless she agrees to work for an organisation called GJIC (the Global Joint Intelligence Commission).

Being blackmailed is one thing, discovering that her mother is both alive and the President of GJIC is quite another. Then there’s the escalation of Mythos sightings and the bounty on her head.

Oddly, Hamish is the only one she can rely on. Life is complicated.