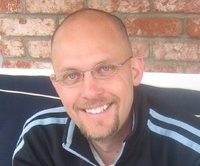 Author bio:
Ernie Lindsey grew up in the Appalachian Mountains of southwest Virginia, working on the family farm and reading, and has spent his life telling stories to anyone that will listen. He currently works as a freelance writer and is the author of five Mystery & Suspense novels and numerous short stories. When he's not writing, you can find him tackling the gigantic To Be Read list on his Kindle or the never-ending stack of books in his office.

Ernie and his family live in Oregon, along with a multi-fingered Hemingway cat named Luna.

Hi Ernie, welcome over at The Book Plank and for taking your time to answer these few questions for us.

BP: First off, can you give us a short introduction as to who Ernie Lindsey is? What are your hobbies, like and dislikes?
EL: Thanks for having me, Jasper! It’s funny how I tend to define myself by what I used to do, but officially, I’m an unemployed technical writer who turned to writing fiction as a way to supplement my lack of a job.  I’ve been writing fiction since 1994, however, so it’s not a new thing. The difference is, I’m earning a living! I’m also a stay-at-home dad to a nearly two-year-old toddler who keeps me busy when I’m not writing.

BP: You have been writing for a few years already, do you know when and where you decides that you wanted to write books?
EL:  Honestly, I’m having trouble remembering, but I was a senior in high school in 1994, and I’m fairly certain I started writing to impress girls back then. That still hasn’t changed. I look for my wife’s approval first every time I finish a novel. At some point, while I was at Old Dominion University, I began writing short stories to entertain my friends. They loved them so much that I kept doing it and eventually I thought I might be able to make something out of this talent. It took twenty years, but here I am.

BP: Your latest book, Super, is a superhero story, but not in the lines of a traditional one. What gave you the idea to write such a story?
EL:  Believe it or not, I actually had a dream about the plot. I know that sounds trite, but the initial idea stemmed from a dream where someone had murdered Superman in the Maldives. There was a Korean woman in a white suit and another assassin. I woke up before I learned who did it, and I was so intrigued by the story that I had to write it out to discover what happened.

BP: Superheroes are often associated with a set of rules and regulations, Super sort of goes against the grain. Did you have any fear that you story would be badly received?
EL:  Definitely! I worked with a friend at Amazon on constructing the story idea once I got about a third of the way into the plot. He’s a self-professed comic book geek and after he’d read some of it, he suggested that I’d definitely ruffle some feathers with the direction I was going. So, with his help, I tweaked it to the point where we felt that readers of the superhero genre wouldn’t chase me with torches and pitchforks.

BP: The reception of Super has actually been very positive, what was your first thought when you read so many positive reviews?
EL: Surprise, actually. At its core, the story is really a political thriller, with a very HUMAN aspect to it, that just happens to involve superheroes. I’ve been amazed that readers have accepted it for what it is, and responded so positively.

BP: what do you think makes a superhero in your eyes, is it only amazing superpowers or more?
EL: My first reaction is to say, yes, superpowers, but then when you consider the industry giants like Batman and Iron Man, who just happen to have billions of dollars and cool gadgets, it changes the perspective. To me, being a superhero, whether you have powers or gadgets, is all about being someone that’s larger than life. Someone that’s bigger than the norm, no matter how they accomplish that.

BP: If you could be a superhero, either one that is already known or make one up, who would you be?
EL: Aquaman. That guy gets a bad rap. Deep down, I’m a fixer-type with my personality, so it’d be great to take over and see what I could do to help out Aquaman’s image.

BP: Even though you have written stories prior to Super, did you still encounter any specific problems when you were writing it?
EL: I very much write by the seat of my pants. I write like I’m reading the book as it unfolds and often don’t know how the mystery will be solved until I’m writing the actual sentence. I figure if I’m surprised, the one guy who should know where the story is going, then it’ll be doubly exciting for the reader. That said, I may have gotten stuck on the plot for about five minutes one day, but all in all, it was a fluid story that I plowed through in about a month.

BP: What was the hardest part in writing Super?
EL: Keeping the present and past timeline cohesive, definitely! It alternates between present and past from chapter to chapter until the timelines merge, and then it moves forward in the present. It had to happen that way because of a few major “reveals” in the story. Juggling everything certainly made this one of the most complex books I’ve ever written, that’s for sure. I actually had to keep notes.

BP: Besides the hardest part in writing, which chapter, scene or part of Super did you enjoy writing about the most?
EL:  Chapter One was so much fun for me. The genesis of the story all hinges on Leo seething over “the Korean woman in white” bragging about her major kill, all while he knows the truth behind what actually happened. It sets everything in motion, leading up to a speedy ride, like removing that one little rock that’s holding a giant boulder in place at the top of a hill.

BP: If you would have to sell Super with a single sentence, how would it go?
EL:  My friend at Amazon gave me this line back when I first finished the manuscript and he read it all the way through. “Every hero’s journey has a beginning, middle, and end…I am that end.”

BP: Everyone enjoys fantasy and science fiction in their own way, what do you like most about it?
EL: I suppose it can be said for all types of fiction, but to me, with Science Fiction and Fantasy, you get to make your own rules for the world you’re creating. Writing any type of fiction takes an enormous amount of creative energy, but I’ve always felt that Sci-Fi and Fantasy really stretches those boundaries because you’re creating entire worlds and universes.

BP: Now that you published Super, do you have any projects that you would like to pursue in the near future? The ending of Super is open, do you plan to turn it into a series?
EL: I am, for certain. Right now I’m finishing up a short project that I started a year ago, I have another novel lined up beyond that, and then I’d like to dedicate the next six months to a year writing sequels to Super. There’s so much room to build out that world.

BP: You have been self publishing books from the start of your writing career, do you have any tips for other author who are interested in self publishing?
EL: I could write a book on this topic alone, but there are plenty of excellent ones already out there. I’d recommend David Gaughran’s Let’s Get Digital and Let’s Get Visible, then Write. Publish. Repeat by Sean Platt and Johnny B. Truant. Also, go follow Michael Bunker’s blog—he’s doing great things with ebook marketing. My personal advice is, don’t be afraid to invest in quality. Hire top notch editors and top notch cover designers. You’re competing with professionally produced books from traditional publishing houses who throw lots of money at books to make them look professionally produced. It’s not hard for a reader to tell the difference.

BP: If you would have to give your top 5 favourite books, which would they be?
EL: Man, that’s like asking me to pick my five favorite children, even though I only have one of my own. The first two are simple: Tomcat in Love by Tim O’Brien and Jitterbug Perfume by Tom Robbins. More recently I was blown away by Hugh Howey’s Wool series, and The Martian by Andy Weir absolutely rocked. With Weir’s The Martian, I can’t ever remember audibly cheering, laughing, and crying on the same page. That leaves… The Voice of the Night by Dean Koontz, and that’s because it was one of the first thriller books I’d ever read. I was still relatively young, maybe thirteen at the time, and it made me realize that a lot of fiction didn’t have to be boring like the things we were required to read in school.

BP: And just lastly , can you give us a short sneak peek as to what is in store for the readers of Super?
EL: More mysteries to solve, new superheroes, origin stories…so much to come.


BP: Thank you very much for your time Ernie and good luck with writing the sequel!
EL: Thanks for having me, it’s been a blast!