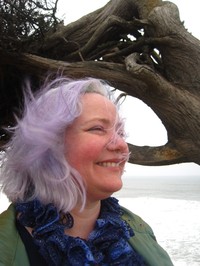 ALYC HELMS did her graduate work in anthropology and folklore, which makes her useless for just about anything except writing. She lives and writes in a dilapidated beach bungalow outside of San Francisco, near a horse trail, a troll bridge, and a raptor preserve (hopefully of the veloci– variety). The Dragons of Heaven is her debut novel. 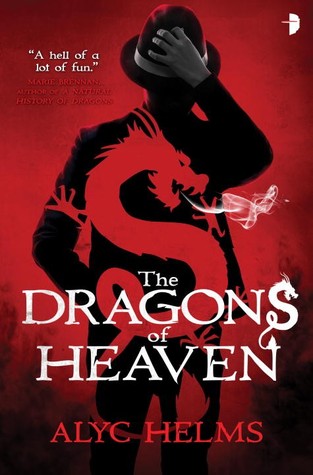 Hi Alyc, welcome over at The Book Plank and for taking your time to answer these few questions for us.


BP: First off could you give us a short introduction as to who Alyc Helms is? What are your hobbies, likes and dislikes?

AH: Well, I can try for short. I'm a bit of a dilettante, which actually helps with being a writer because I tend to know a little bit about a lot of things. I've been a gamer (primarily tabletop RPG) for most of my life, which includes playing, running, and even writing games. Mostly my own home-brews (including a World of Darkness-styled Dragon game), but I've now officially done a bit of professional game writing for tabletop companies.

I'm also a theater geek and a dancer. I competed Scottish Highland dance into my late 20s until the twelve-year-olds with springs surgically implanted in their butts started beating me. I still dance at Dickens and Renaissance Faires, which gets into my other love: sewing and costuming. I recently created a full mid-century Victorian ensemble, from corset to capelet, in a matter of a few days. Someone described it as 'hideously Victorian,' which is about as high a compliment as I think mid-century Victorian fashion can achieve.


BP: Your first plans were a possible career in academic writing but you choose to follow your heart to writing fiction. When and where did you decide that you wanted to pursue this different career?


AH: I don't think it was a decision so much as a lifeline. I really loved doing academic work. I was pursuing my doctorate in anthropology by looking at the presentation of identity and locality for tourist consumption at archaeological sites in Ireland. But the deeper I went into it, the more I began to question the point of it, not because the topic wasn't interesting to me, but because I seemed to be the only person interested.


Writing—and especially writing The Dragons of Heaven—became my way of talking about things I care about (identity, gender, representation, global power relationships, activism) in ways that would interest other people. And it was more fun. AND I didn't have to worry if I couldn't secure grant funding or a tenure-track position!


BP: You have written several short stories prior to The Dragons of Heaven, writing a first full length book is a daunting task. How did you went about and plan writing your first book? Was it different than writing a short story?


AH: You have been fooled by the magic of publication schedules! I actually wrote almost all my published short stories AFTER I finished The Dragons of Heaven. Even my first published short story was sold about six months after I put period on the first draft of the novel.


This is different for every writer, of course, but I prefer novels—both for reading and writing—over short stories. In part this is because short stories are HARD. They have to be tightly focused on a properly sized idea. You see this in the best short stories by writers like Connie Willis or Ted Chiang. But I like to meander, explore, build character in tiny moments that are fun in their own right without necessarily needing to do all the heavy lifting of the novel. The most consistent bit of feedback I get on my short stories is that they read like they're novels, like there's a whole world packed away behind the words, and the reader only gets to see that world in glimpses. And that's because there usually is. With novels, I get to breathe.


And then I take a razor to that sucker, kill my darlings, trim the fat, and all the other large and small-scale revision efforts that are the particular challenge of novels!


BP: What gave you the idea behind the story of The Dragons of Heaven?


I was playing in a game we'd lovingly titled the Sunday Afternoon Comic Stack, because each player had their own genre they were exploring, from four-color supers to hyper-violent revenge fantasies. Imagining the game as a comic stack was the only way to force it into thematic coherence.


My character was a legacy hero overshadowed by her grandfather's reputation. I decided to take her to China to train with the ancient dragons who'd trained her grandfather, and my ST told me to write it up as a side adventure. So I did.


40k words of write-up. Like you do (when you're avoiding writing your dissertation proposal).


At the same time, I was also working the worldbuilding for a for-realz secondary world epic fantasy with a Venetian Renaissance flavor. I looked at Dragons and I looked at Chiaroscuro, and I decided that Dragons would be the easier first novel to write. I revised the structure to be a call-and-response between Missy's past in China and her present return to China, rewrote most of what I'd written (the parts I didn't throw out wholesale), and finished the final draft about seven years after I started that first character fic. A lot has changed, but I still owe a shout-out to that Sunday Afternoon Comic Stack game.


BP: The Dragon of Heaven has a supernatural superhero theme to it. If you could choose any superpower what would it be?


AH: Time control, which is something I gave to the dragons in The Dragons of Heaven, since... you know... they're basically gods, and time control is all superpowers in one. I'd love to be able to stop my own entropic decay (immorality), to slow my time relative to other people's time so that I can live a lifetime—or read a book—in moments (super intelligence). I could go anywhere in an instant (teleportation), pluck moments out of time that were inconvenient to me (hah, no parking tickets ever!)... and this is starting to slide toward supervillainhood, so I'll just leave it at that.


BP: Superheroes in my opinion are difficult material to write about, often they are portrayed as omnipotent characters but there has to be a balance, like Superman has his kryptonite. How did you balance everything?


AH: From a story perspective, I think it comes down to the sorts of challenges a superhero has to face. If it's a challenge they can solve with their powers, then it isn't a narratively interesting challenge. Sure, kryptonite weakens Superman, but the most interesting Superman stories come from the way his ethical framework is tested by Lex Luthor. You can't heat-vision a moral dilemma (or you can, but Superman wouldn't, which is what makes him an interesting character).


I try to craft Missy's challenges along those lines. If she can kung-fu or Shadow control her way out of the challenge, then I haven't created a very good challenge. The other side of the balance is that I gave her a ridiculously over-powered nemesis, which means she's forced to rely on collaborative problem-solving, her wits, and her opponent's underestimation of her in order to win the day. And finally, at least a few of her challenges are a result of her own misguided actions, which (hopefully) allows her to reflect and grow as a character.


BP: The Dragons of Heaven will be released later in June this year, if you would have to sell your book with a single sentence, how would it go?

AH: You know how I said I struggle with short stories due to their compact length?


I'm even worse at elevator pitches :-)


"It's little trouble in big China when a young woman takes on her grandfather's hero legacy to stop a rogue dragon from being a total wanker."


I should probably revise those last few words to be more epic, but that's really what's going on.


BP: What has been the most difficult or most challenging part in writing The Dragon of Heaven?


AH: Describing the past/present structure. I'm so grateful to Arrow (the television show) for giving me a model to point to when I'm talking about how the book is structured to show the past informing the present in order to give action a sense of immediacy that flashbacks don't allow for.


BP: Besides the hard bits in writing, which chapter, scene or character did you enjoy writing about the most?


AH: I hit a folkloric cadence, especially during the sections where Missy is training with the dragons. You can see my folklore background peeking out all over the place as I employ patterns and tropes from Chinese folklore and epics like The Water Margin and The Romance of the Three Kingdoms. I think it helps to marry the wuxia aspects with the pulpy/noir aspects.


Also, it means I get to throw a bunch of Western tourists into a cannibal inn scenario, which just makes me cackle. Cannibal inns are the BEST.


BP: If you would be given the chance to make one final change to The Dragons of Heaven before it hits the shelves would you do so? If yes, which part and why?

AH: I misspelled Kim Cattrall's name, and somehow I made it through eight years and endless rounds of editing without catching it. I'm sorry, Kim!


BP: Now that your debut will be published do you have any other projects that you wish to pursue in the near future? Will The Dragons of Heaven be made into a series?


AH: I'm already working on the sequel, The Conclave of Shadow, which will be published by Angry Robot next year. I pitched it as Thelma and Louise take on A Thousand and One Nights. This one definitely has more of a Womance vibe, with Missy teaming up with Dr. Abigail Trent, aka The Antiquarian, to 'forcibly repatriate' some looted artifacts. Abby is my chance to toss in some real archaeology stuff. Gotta use my degree for something?


I've also finished revisions on that Venetian-esque fantasy I mentioned earlier, and I will be sending it to my agent soon. That one is about as different from Dragons as you're likely to find. I've pitched it as "Game of Thrones meets Queer as Folk by way of Kushiel's Dart." We'll see if anyone wants it.


BP: Everyone enjoys fantasy and science fiction in their own way. What do you like most about this genre?


AH: People throw around the term 'escapist' like it's a bad thing, but sometimes distance from a subject helps clarify and focus thinking and talking about that subject. I think F&SF offers a variety of positive escapes. Readers escape into the PoV of characters with different experiences from our own, encouraging us to learn how to see things from other peoples' perspectives. We escape into stories where action and agency matter, where we can see the impact of personal ethics and small choices, and that teaches us that agency, action, and ethics have value and meaning, even if we don't always see results in our everyday lived experiences. Even the most mediocre F&SF can be escapist comfort food for people who are overwhelmed by stress or trauma (it was a lifesaver for me as a teen, and again when I was struggling with leaving grad school), while the best (I'm looking at you, Ann Leckie and Ancillary Justice) balances complex character, high concept, engaging story, and critical analysis of real world problems as seen through a fictional model.


BP: If you would have to give your top 5 favorite books in fiction, which would they be?


BP: And just lastly, can you tell us a bit what is in store for the readers of The Dragons of Heaven?


BP: Thank you very much for your time Alyc and good luck with your future writing projects!