September 14, 2015
A few toughts about zombies by Alison Littlewood 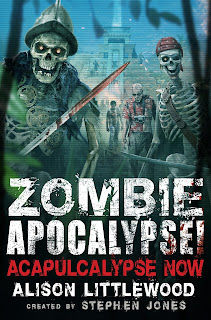 AH, ZOMBIES. ZOMBIES! Those stinky denizens of the realm of the walking dead. I have to confess, I’d never written a story with zombies in it until someone asked me to. I think that’s partly because I didn’t grow up reading genre fiction. I borrowed my brother’s Stephen King novels when I was younger, but other than that I read anything and everything that fell into my grasp. I remember a few years ago going to a writers’ convention, and having to go away and Google “Cthulhu”. Once I realised it was genre fiction that got me itching to get to the keyboard I’ve naturally become more immersed in it and I’ve grown to love it dearly. But I’ve had to play catch-up to see what has gone before, and it’s difficult to shake the sense of coming to it from the outside. So, writing about one of the horror readers’ best-loved tropes, and one with such a long history, was kind of daunting.

On the other hand, when Stephen Jones came along and did ask for his Zombie Apocalypse! series . . . well, the thing that kept returning to me was that it sounded like an outrageous amount of fun. Not only did Steve want me to write about zombies, but he wanted me to write about them over-running a Mexican holiday resort. The book would be called, appropriately, Acapulcalypse Now. I’d written short stories set overseas before, including one in Mexico that Steve had picked for The Mammoth Book of Best New Horror #24, and I’d been thinking for a while that I’d like to set a whole novel somewhere a bit more exotic – well, here was my chance.

And so I dived in, and discovered just how much fun zombies can be. Of course, I’m probably influenced in this by films like Shaun of the Dead or Zombieland. There’s something about zombies and their long history that means they just demand a degree of fun, don’t they? My novel hopefully has a few giggles as well as scare moments; I would have found it difficult to write something with them in it without a wry wink and a smile.


But zombies have a deeper side. The thing is – and I think this is a big part of why they’ve endured so long – is that zombies aren’t some nameless monster we can’t really recognise. Zombies are us. They’re our brothers or husbands or mothers or wives, turned into something “other” by a single bite, and they will come after us without mercy or feeling. There’s pity in that, and empathy, and even love, as well as fear. The range of emotions they can engender is incredibly wide, making the possibilities pretty much endless. 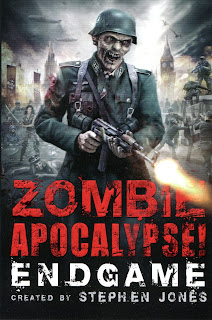 The question I’m supposed to be answering (I’ll get to it, I promise), is what is my vision of zombies? Are they quick and ruthless or shambling and dim-witted? Well, they fit within the universe created by the Zombie Apocalypse! series of mosaic novels and single-author volumes, so to an extent that was laid out for me. A lot of them fit Romero’s shambling-and-mindless image of a zombie, but the Human Reanimation Virus has more variation than that. The more recently dead are quicker. There is also another strain that enables the zombie to retain an impression of memory; they can speak and function at a higher level and give structure and organisation to the New Zombie Order.

I’ve worked within that, and even had fun referencing some of the characters in the other books, but I’ve also added a new flavour of my own. That’s the beauty of the Zombie Apocalypse! series; it’s involved a number of voices, with each writer adding a little bit of something new. And after all, it would have been a great shame to visit Mexico without using some of its myths and ancient beliefs and rituals. So without giving too much away, the Mayan death gods are interwoven with the new walking dead rulers of the land, bringing a whole new element to the zombie apocalypse. And I enjoyed working on it hugely. As lovely as it is to hold the finished book in my hand, I’m a little bit sorry to leave the shambling dead behind me. Zombies . . . I knew they’d be fun. I just never realised exactly how much!


Alison Littlewood is the author of A Cold Season, published by Jo Fletcher Books. The novel was selected for the Richard and Judy Book Club, where it was described as “perfect reading for a dark winter’s night”. Her sequel, A Cold Silence, has just been published, along with Zombie Apocalypse! Acapulcalypse Now.


Alison lives with her partner Fergus in Yorkshire, England, in a house of creaking doors and crooked walls. You can talk to her on twitter @Ali__L and visit her at www.alisonlittlewood.co.uk