Auhtor Bio:
Clifford Beal, originally from Providence, Rhode Island, worked for 20 years as an international journalist and is the former editor-in-chief of Jane’s Defence Weekly in London. He is the author of Quelch’s Gold (Praeger Books 2007), the true story of a little-known but remarkable early 18th century Anglo-American pirate. But he’s also been scribbling fiction from an early age: his seventh grade English teacher nicknamed him “Edgar Allen” undoubtedly due to the gothic subject matter of his extremely short stories. His debut novel, Gideon’s Angel, is published by Solaris Books in March 2013.

For recreation, Clifford used to don plate armour and bash the tar out of people in the Society for Creative Anachronism before moving to more civilised pursuits such as 17th century rapier and dagger fighting and motorcycling (though not simultaneously). Today, he is more likely to be found at the seaside or the Savile Club in London, sharing good wine and conversation in a place where the sparring is usually only verbal. 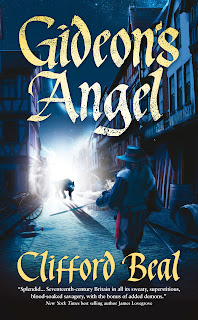 Hi Clifford, welcome to The Book Plank and for taking your time to answer these few questions.

BP: First off, could you give us a short introduction as to who Clifford Beal is? What are you hobbies, likes and dislikes?
CB: Well…I’m a middle-aged guy who still has all his own hair and teeth, which isn’t bad really. For hobbies, I used to be involved in medieval combat on foot in full armour then moved on to rapier and dagger combat. I’m a little too slow for that stuff now though and prefer to spend time at museums and galleries or reading when I’m not writing. Occasional skeet and target shooting when I get the chance. That said, I still yearn to pick up a sword again.

BP: Gideon’s Angel was your debut, do you still know when and where you decided that you wanted to become an author?
CB: I’d wanted to be an author ever since I can remember. I was a journalist for many years and never found the time to devote to writing a book. But after I left that profession, I refocused and published Quelch’s Gold in 2007. That scratched the itch but it was non-fiction. I really wanted to write a novel.

BP: Gideon’s Angel takes place the 1650s in the time of the English Civil War, what gave you the inspiration/idea behind writing the story?
CB: It’s a time period I’ve always loved. Sort of the crossover point between the medieval and modern worlds. And I knew England was in turmoil and economic depression when the Civil War ended, giving way to all sorts of bizarre religious sects and “end of days” scares. I had started out to write a political thriller about an assassination plot, but then I decided to go down the supernatural road to really to make it a historical fantasy novel.

BP: Writing a debut is a daunting task, how did you go about and write Gideon’s Angel?
CB:  It does require self-discipline to carve out the time each week, especially if you have a day job or a family. But I found that motivating myself wasn’t a problem really because I always had these characters and scenes running around my head that just had to get out on paper or my head would explode.

BP: If you would have to sell Gideon’s Angel with a single sentence, how would it go?
CB: He returned to kill a tyrant but he found the Devil instead.

BP: Have you learned any valuable tricks of the trade when you were writing Gideon’s Angel that you will be able to use when you will be writing new stories?
CB: I’d have to say it’s just getting the basic story out and down on the keyboard. Once that’s done then you go back to the beginning and craft it. You build a novel one chapter at a time. Looking at it that way you don’t become as daunted by the task.

BP: Did you encounter any specific problems when you were writing Gideon’s Angel?
CB: With historical fiction of any sort, you really have to get your facts straight. Readers do pick up on inaccuracies, and bad history or anachronisms can ruin the reading experience for those who know the time period. That meant rigorous research about things, particularly around London where much of the novel is set.

BP: What was the hardest part during the writing of Gideon’s Angel?
CB: Well, like for any novelist, tying together all those plot threads and writing a convincing climax. I think it was far harder writing the second draft when you have to really tweak all the mechanics of the novel to get it right.

BP: Besides the hardest part, which part did you enjoy writing about the most?
CB:  I love writing a good fight or battle scene, smelling the blackpowder and hearing the metallic clash of steel. And also, it was great fun writing the supernatural elements in the story, imagining how a demon would actually look and behave once it was summoned. And more importantly, how would a person actually fight one?

BP: Gideon’s Angel was published last year, if you would be given the chance to redo a chapter or a scene for a re-issue would you do so?  And if yes which part and why?
CB: That’s a difficult one. In one sense, you can almost always better your prose with another rewrite but at some point that has to stop and you have to go with what you have. I think I’m pleased to let Gideon’s Angel stand as it is and move on to other projects.

BP: Gideon’s Angels is stand alone, would there be a possibility to translate it into a series?
CB: It does work as a stand-alone, but I can reveal that a prequel will be appearing soon from Solaris Books. It’s an “origin” story about how the protagonist, Richard Treadwell, became a mercenary soldier in his youth. You might say it’s a bit like Platoon meets The Wicker Man. Much of it is set in the Harz Mountains in Germany. Think witches.

BP: Now that Gideon’s Angel has been published do you have any other projects that you would like to pursue in the near future?
CB: Currently, I’m penning a high epic fantasy novel but I’ve got other things on the boil that are more historical fantasy based.

BP: Everyone enjoys Fantasy and Science Fiction in their own way, what do you like most about reading and writing it?
CB: Good Science Fiction and Fantasy can shed light on the human condition  because it uses the fantastic to break out of the confines of normal existence. For me, it’s got to be all about the characters and not just the setting.

BP: And just lastly, if you would have to give your top 5 favourite books, which would they be?
CB: That’s way too difficult to answer as I think my favourites have changed as I’ve gotten older. The Lord of the Rings will always have a special place in my heart because it introduced me to fantasy literature. If we stick to genre fiction though, let me list some of my favourite authors: Michael Moorcock, Stephen King, Fritz Leiber, Algernon Blackwood, Neil Gaiman and David Gemmell. Choosing my favourite books would be  like having to choose between my children!