Last month I decided to make a new feature for the blog, wherein I look forward to a set of titles that I will be reading the coming two weeks, usually about 6, but more if I can manage.

So what will I be reading in the coming two weeks? Here is my list: 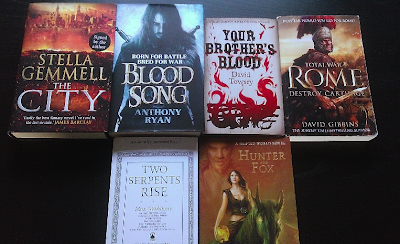 Shadow demons plague the city reservoir, and Red King Consolidated has sent in Caleb Altemoc — casual gambler and professional risk manager — to cleanse the water for the sixteen million people of Dresediel Lex. At the scene of the crime, Caleb finds an alluring and clever cliff runner, crazy Mal, who easily outpaces him.

But Caleb has more than the demon infestation, Mal, or job security to worry about when he discovers that his father — the last priest of the old gods and leader of the True Quechal terrorists — has broken into his home and is wanted in connection to the attacks on the water supply.

From the beginning, Caleb and Mal are bound by lust, Craft, and chance, as both play a dangerous game where gods and people are pawns. They sleep on water, they dance in fire... and all the while the Twin Serpents slumbering beneath the earth are stirring, and they are hungry.

2. Your Brothers Blood by David Towesy (Jo Fletcher Books)
Thomas is thirty-two. He comes from the small town of Barkley. He has a wife there, Sarah, and a child, Mary; good solid names from the Good Book. And he is on his way home from the war, where he has been serving as a conscripted soldier.

Thomas is also dead – he is one of the Walkin’.

And Barkley does not suffer the wicked to live.

Built up over the millennia, layer upon layer, the City is ancient and vast. Over the centuries, it has sprawled beyond its walls, the cause of constant war with neighbouring peoples and kingdoms, laying waste to what was once green and fertile.

And at the heart of the City resides the emperor. Few have ever seen him. Those who have remember a man in his prime and yet he should be very old. Some speculate that he is no longer human, others wonder if indeed he ever truly was. And a small number have come to a desperate conclusion: that the only way to stop the ceaseless slaughter is to end the emperor’s unnaturally long life.

From the rotting, flood-ruined catacombs beneath the City where the poor struggle to stay alive to the blood-soaked fields of battle where so few heroes survive, these rebels pin their hopes on one man. A man who was once the emperor’s foremost general. A man, a revered soldier, who could lead an uprising and unite the City. But a man who was betrayed, imprisoned, tortured and is now believed to be dead...

This is the story of Fabius Petronius Secundus – Roman legionary and centurion – and his rise to power: from his first battle against the Macedonians, that seals the fate of Alexander the Great's Empire, to total war in North Africa and the Seige of Carthage.

Fabius's success brings him admiration and respect, but also attracts greed and jealousy – the closest allies can become the bitterest of enemies. And then there is Julia, of the Caesar family – a dark horse in love with both Fabius and his rival Paullus – who causes a vicious feud.

Ultimately for Fabius, it will come down to one question: how much is he prepared to sacrifice for his vision of Rome?

Inspired by Total War: Rome II, the bestselling Total War series, Destroy Carthage is the first in an epic series of novels from David Gibbins. Not only the tale of one man’s fate, it is also a journey to the core of Roman times, through the world of extraordinary military tactics and political intrigue that Rome’s warriors and citizens used to cheat death.

5. Blood Song by Anthony Ryan, Raven's Shadow #1 (Orbit)
We have fought battles that left more than a hundred corpses on the ground and not a word of it has ever been set down. The Order fights, but often it fights in shadow, without glory or reward. We have no banners.

Vaelin Al Sorna's life changes forever the day his father abandons him at the gates of the Sixth Order, a secretive military arm of the Faith. Together with his fellow initiates, Vaelin undertakes a brutal training regime - where the price of failure is often death. Under the tutelage of the Order's masters, he learns how to forge a blade, survive the wilds and kill a man quickly and quietly.

Now his new skills will be put to the test. War is coming. Vaelin is the Sixth Order's deadliest weapon and the Realm's only hope. He must draw upon the very essence of his strength and cunning if he is to survive the coming conflict. Yet as the world teeters on the edge of chaos, Vaelin will learn that the truth can cut deeper than any sword.

In a world that is in constant shifting, where mountains can change to plains and then to lakes, Talyn is the hunter for the Caisah, and a wreck of a once-proud person. She has lost her people, the Vaerli, and her soul working for the man who destroyed her people. All unknowing, she carries within her a Kindred, a chaos creature from the center of the earth that wants to help bring the Vaerli back to power. However, she has lost the ability to communicate with it.

She must also deal with the machinations of Kelanim, the mistress of Caisah, who out of fear will do anything to bring Talyn down.

Little does the Hunter know that salvation is looking for her, and it wears the face of gentleness and strength. Finn is a teller of tales who carries his own dreadful secret. He sets out to find answers to his path but ends up in the city of Perilous and Fair where he meets Talyn. He knows the danger and yet is drawn to her. Their fates are bound together.

Meanwhile, the Hunter's lost brother Byre is searching for his own solution to the terrible curse placed on the Vaerli. He sets forth on a treacherous journey of his own, which will intersect in the most unlikely place with that of Talyn and Finn.

The ramifications of this encounter will be felt by all the people in Conhaero, from the lost Vaerli to the Caisah on his throne

What will you be reading in the coming weeks?