Author bio:
Rjurik Davidson, a young Australian author who won the Aurealis Award for Best Newcomer some years ago, has been writing about the city of Caeli-Amur for nearly a decade. His debut novel, Unwrapped Sky is set in this city-state where magic and technology are interchangeable; where minotaurs and sirens are real; where philosopher-assassins and seditionists are not the most dangerous elements in a city alive with threat. During the day, the ordinary citizens do what they must to get along. But at night, the spirit of the ancient city comes alive, to haunt the old places... 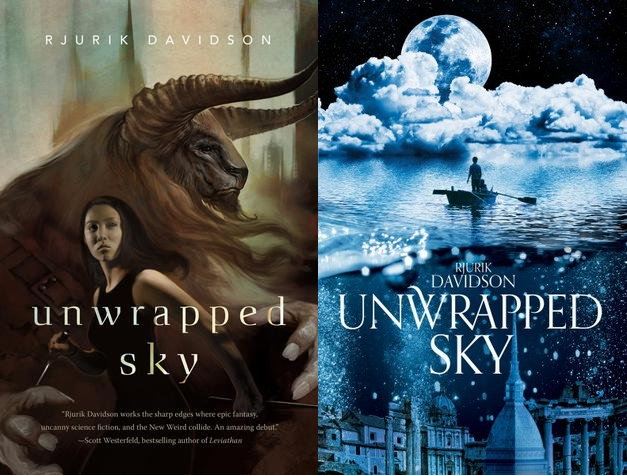 Hi Rjurik, Welcome over to The Book Plank and for taking your time answer these few questions.

BP: First off, could you give us a short introduction as to who Rjurik Davidson is? What are your hobbies, likes and dislikes?


RD: Asking someone about themselves is a pretty fraught thing. The early jazz musician Jelly Roll Morton used to frequently declare that he invented Jazz (he didn’t) and lie about his age to fit this story. It’s not, of course, than everyone is going to lie like Jelly Roll, but rather that we select a series of facts about ourselves which match our self-image. That qualification aside, I’ll tell you a few things. I’ve always tried to live a varied life, and have done many jobs. One of my qualities is curiosity. I love learning new things. There’s too much to know in this world. My interests include from quantum physics, ancient history, political theory, psychology and psychoanalysis. I’ve lived around the world (though Australian, I’m now in Europe), worked as a cook, clerk, lecturer, and builder. I speak French. I love to see things I’ve never seen before. I love to meet unusual people. I’m very loyal but don’t often forgive people who have treated me poorly.

BP: Unwrapped Sky is your debut. When and where did you decide that you wanted to become an author?
RD: I first wanted to become a writer in my teenage years. Before that I wanted to be a scientist, though I don’t know if I really knew what that mean. Anyway, I loved reading – and read indiscriminately. For quite a few years in my late teens I didn’t read any genre, but was deeply interested in absurdist theatre, ‘postmodern’ fiction (Calvino, Borges, etc). Then I became interested in politics. But when I was at university, I discovered ‘New Wave’ science fiction of the 1960s, and then I started to realise I wanted to write speculative fiction.

BP: There are some amazing ideas behind Unwrapped Sky, what gave you the inspiration to write this story?


RD: When I became interested in politics, it wasn’t the politics of everyday government decisions (I still have trouble following the details of that), but rather the grand events of history: great social and religious movements, revolutions and counter-revolutions, wars and depressions. When I was about twenty years old, I wanted to write a novel where magicians formed an oppressed caste and revolted. I didn’t know how to write it at the time. The New Weird hadn’t happened and anyway, I was doing other things. When I returned to fiction after getting a doctorate, I attended Clarion South, came up with the fantastic city of Caeli-Amur, and all kinds of influences started to seep in: my interest in ancient myth and history, my interest in science and mathematics (when I first attended university, I studied maths), my attraction to weird fiction, my interest in historical revolutions and radicals. It all came together in Unwrapped Sky.

BP: Writing a debut is a daunting task, how did you tackle it?


RD: A bit at a time, and facing many challenges. Unwrapped Sky has three characters, and their stories entwine. That took some organising. What you gain in richness you pay for in pain. The trick is not to freak out and just keep doing bits and pieces every day. That’s the basic truth about writing: stick to the process and you’ll get there in the end.

BP: Now that you have written your debut, did you gain valuable experience that you will be applying in your future works?


RD: Like anything, you get better with practice. That doesn’t mean your future work will necessarily be better, but in general you become more proficient. I think my next book, called The Stars Askew, is more ‘fluid’ and ‘moves more easily’ than Unwrapped Sky. I was more confident when I wrote it.

BP: Unwrapped Sky is out this April. If you would have to sell your book with a single sentence how would it go?


RD: “I’m not saying that on your death bed you’ll regret not reading Unwrapped Sky. I’m not saying that. Not exactly.” Damn, that’s three sentences. Sorry. How about: “Revolution, betrayal, redemption - the fantastic city of Caeli-Amur will never be the same.”

BP: There are many debuts this year, where do you think Unwrapped Sky sets itself apart with amongst the others?


RD: Oh, that I couldn’t answer. The number of books coming out staggers me. All those writers! Don’t they have anything better to do?

BP: Did you encounter any specific problems when you were writing Unwrapped Sky?


RD: Plot problems. The whole thing became so unwieldy that I kept having to go back and rethink it. In its final state I think it has a nice balance between complexity and ease, but that took some work.

BP: What was the hardest part when you were writing Unwrapped Sky?


RD: Finding the time to write when you had to make a living. For some years I taught at university as a sessional tutor and lecturer. Even though I was more qualified than many of the full-time employees there, I was still (as all sessional teachers are) overworked, underpaid and exploited horribly. This was the chief reason Unwrapped Sky took so many years to finish.

BP: Besides the hardest part, which chapter or scene or character did you enjoy writing about the most?


RD: Generally I enjoy writing action sequences – they tend to fly onto the page – but there are that many in Unwrapped Sky. There is a scene where the main character Kata meets the imprisoned Siren (as in the mythic creature), who is called Paxaea. They see something of themselves in each other, and fairly spontaneously embrace each other. There are little moments through the book like that which I enjoyed a lot.

BP: If you would be given the chance to rewrite a specific part of the book before the publishing date would you do so? And if yes, which part and why?


RD: Yes, if there was one thing I’d change a little, it is the way the seditionist movement – the revolutionaries of Caeli-Amur – are isolated from the people. I’d include more interaction between them, so the seditionists didn’t seem such an isolated group. Then again, there’s much more of that interaction in the next book, The Stars Askew

BP: Unwrapped Sky left the story with a lot of room for the sequel, can you give us a sneak peek of what is in store for us?


RD: As I’ve mentioned above, the next book is called The Stars Askew (out April 2015, I’d say). It’s a sequel. I can’t give too much away, except to say that shortly after the end of Unwrapped Sky, things haven’t gone as expected. That’s currently with my editors. The first draft is done. After that comes the third book, The Black Sun. Hopefully I’m contracted for that and I can get it done by April 2016.

BP: Now that Unwrapped Sky will be published do you have other projects that you wish to persue in the near future?


RD: At the moment, I’m writing a steampunk novel set in an Alternate Australia. Here’s a fragment from the synopsis: “In Melbourne’s Museum, a wonderful exhibit of new technologies arrives, filled with splendorous mechanisms, including automatons of all kinds of creatures. When the central exhibit of the exhibition, the “clockwork man” goes missing, librarian and strong-willed suffragette Eugenie (Gene) Healy is asked by the burned out detective, John Lynch to help him with the investigation. The trail leads them to opium dealers and spiritualists, industrialists in the halls of a powerful men’s club, to a rural utopian community who have rejected the modern technologies, and into the hideout of one of the last bushrangers. They encounter the remnants of the megafauna such as marsupial lions that roam the forests and giant lizards that laze languorously by billabongs. In the desert, they find a secret, hidden for millennia which will change things forever.”

BP: Everyone enjoys science fiction and fantasy in their own way. What do you like most about it?


RD: The best of it is a thought experiment, which not only gives us a sense of wonder, but also lets us think about our own world differently. It’s a warped mirror that shows us the world anew.

BP: And just lastly, if you would have to give your top 5 favorite books, which would they be?


RD: Ahg. Uhg. You just broke my brain. I’ll give you five authors who were important to me, in no particular order, and with some thoughts in parenthesis. Eugene Ionesco (how do we make meaning?), Ursula K. Le Guin (how do we live ethically and ethically as political beings?), Leo Tolstoy (life in the face of the immensity of history), Thomas M. Disch (gritty, almost realist science fiction), Kelly Link (those short stories – wow!)

BP: Thank you very much for your time Rjurik and good luck with your future writing!


RD: Thanks for having me.

July 29, 2015
Guest Blog: Alien Invasion Stories from Armada to Grunt Traitor  By Weston Ochse © 2015   There’s something at once terrifying and romantic about an invasion. One wrong move could mean the destruction of everything you know and love, but in the heat of battle, there are crystalline moments in which true humanity shines. Like many military authors, I often look to history for guidance on how to write the future. I’ve always looked at the Battle of Rorke’s Drift as the perfect sort of battle to represent an alien invasion. One hundred and fifty British soldiers in a remote outpost are beset by four thousand Zulu warriors. The odds seemed impossible, yet in the end the British won the day. The early Michael Cain movie Zulu retells this story and stands as one of my favorite military movies of all time. There are moments in the film that resonate. In the face of overwhelming attack, the sergeant major lowly commanding his men to take it easy. Right when everything seems los
Post a Comment
Read more