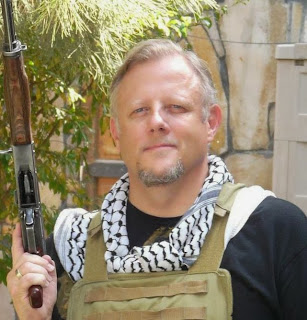 Author bio:
Weston Ochse is the author of twenty books, most recently SEAL Team 666 and its sequel Age of Blood, which the New York Post called 'required reading' and USA Today placed on their 'New and Notable Lists.' His first novel, Scarecrow Gods, won the Bram Stoker Award for Superior Achievement in First Novel and his short fiction has been nominated for the Pushcart Prize. His work has appeared in comic books, and magazines such as Cemetery Dance and Soldier of Fortune. He lives in the Arizona desert within rock throwing distance of Mexico. He is a military veteran with 29 years of military service and currently returned from a deployment to Afghanistan. Please contact him through this site.

Hi Weston, Welcome over at The Book Plank and for taking your time to answer these few questions.

BP: First off, could you give us a short introduction as to who Weston Ochse is? What are your likes/dislikes and hobbies?
WO: I’m a guy in my mid-forties who feels very lucky to have curated the life he has. I’ve spent 30 years in the U.S. military and have travelled to nearly fifty countries. I speak a couple languages. I love to trout and salmon fish. I cook. I drink wine. I absolutely love to travel. And I write. If there was a title for a fisher-cooker-writer-traveller-person then that would be the one I’d use.


BP: You have written a various amount of books already, when and why did you decide that you wanted to become an author?
WO: When I turned thirty I did what I thought everyone was supposed to do (although I get blank stares when I say this in public so maybe I’m the only one who does this), and that was to look back and see what I’ve been doing that I want to change, and then look forward and decide to do those things I hadn’t done, but had wanted to. And then make those changes. One of those things I wanted to do and had never done was to write. I’d always wanted to, but never done it, using the various excuses we all have used. So I sat down and wrote my first short story. It took a month and was appallingly bad. I know it was because of the seven page rejection letter I received from Weird Tales (Thank you Darrell Sweitzer). But I kept at it. I wouldn’t be deterred. I used the same desire to accomplish a mission I learned in the military and saw each story as a hill to be taken.


BP: SEAL Team 666 is your latest series, what gave you the idea to write this series?
WO: The title and idea just begged to become a series. The title was actually created by Peter Joseph and Brendan Deneen at Thomas Dunne Books. Then we got together and thought, what if there’s an even more special SEAL team who protects America from supernatural attack. Then it was just a logical progression to have each book a separate mission.


BP: You have won an Bram Stoker award for one of you books, have you learned a lot from your previous horror books that you were able to use when you were writing SEAL Team 666?
WO: I was awarded the Bram Stoker award for my first novel. I now have more than twenty books in print if you count novellas and novelettes which were also published in book form. I’ve learned so much from each one and wouldn’t have had the chops to write SEAL Team 666 or even my upcoming military sci fi series from Solaris, Grunt Life.


BP: If you would have to sell your series with a single sentence, how would it go?
WO: Badass SEALs expert in supernatural warfare combat monsters so Americans can sleep happy in their beds and eat cheeseburgers.


BP: When you were writing either SEAL Team 666 or Age of Blood, did you encounter any specific problems?
WO: Because I’m still in the military and I know things which are both sensitive and classified, I had to self police in order to ensure I didn’t include that sort of information in the books. For instance, I know exactly the sort of weapons and armor SEAL Team 6 uses. I also know their TTPs. But I’m not going to share those. I don’t want to put those guys in harm’s way. Their job is tough enough. The last thing they need is for some middle-aged guy sitting at a computer somewhere putting them in danger. So I gave them weapons and armor which were several generations old. I upgraded these in Age of Blood, but these still aren’t the ones they really use. Things like that. I want the book to feel real, and it is real, but not too real, especially at the expense of those guys whom I deeply respect

BP: What was the hardest part to write in either of the two books?
WO: You know, I didn’t find it hard at all.


BP: Besides the hardest part, what part of the series have you enjoyed most in writing?
WO: Developing the scenarios for each book and establishing the mythologies. For instance, the first book takes place in Asia, so I used Asian specific monsters and supernatural creatures, each one a hint at who the ultimate baddie was. Age of Blood takes place in Mexico, so I could draw on not only Aztec, but also Mayan and Toltec mythologies. The third book, Reign of Evil, which I’ve just turned in, takes place in England. Being able to research and then develop the scenario I’m going to throw at these hard luck boys is so much fun.


BP: You have a background in the military, are you using any experiences of your when you were setting up your SEAL Team 666 stories?
WO: Oh hell yeah. I have to and I think that’s what makes these books so successful.


BP: SEAL Team 666 has a lot of information about military gear, weapons and such and tactics, did you have to do any extra research to get the facts straight?
WO: Yeah. I know some things, but there are guys out there who are walking talking gear heads and know all the stats and maximum effective ranges. I’m not one of them so research was a must.


BP: The fuchsia mask really cracked me up when I read it for the first time, are those things really done to the new guys?
WO: Oh yeah. It’s a thing we do all over the military The FNG has to earn the right to be part of any team, especially the most elite team, SEAL Team 666/


BP: You show a lot of supernatural creatures and demons in your story, do you still have more new creatures up your sleeves (read = hints towards vampire!)?
WO: Definitely. It’s all based on mythology. And I did use a vampire in Age of Blood. Remember the Obsidian Butterfly?

BP: The SEAL Team 666 has two books so far, the world does lend itself perfectly for new missions for the SEAL’s can we expect more books from you in the future?
WO: Reign of Evil takes place in England and comes out in December. This one’s going to be a shocker because someone we all know and love dies right away in Chapter 1.


BP: Do you have any other projects that you wish to pursue in the future?
WO: I’m always writing. I have Grunt Life coming out from Solaris in April 2014. This is the first of a military sci fi series based on the idea that a private company takes a brigade of PTSD sufferers and retrains them so they can fight the alien invasion.


BP: Everyone enjoys science fiction and fantasy in their own way, what do you like most about reading and writing it?
WO: I love the world building. Most of the other writers are so much smarter than me. I’m often in awe of their ability to create entire universes populated by men, machines and creatures that are absolutely believable. I think my strength lies in characterization.


BP: And just lastly if you would have to recommend your top 5 favorite books, which would they be?
WO: This list is ever-changing. But for this conversation let me say -- Old Man’s War by John Scalzi; The Forever War by Joe Haldeman; Dandelion Wine by Ray Bradbury; The Shibboleth by John Hornor Jacobs; and Night Film by Marisha Pessl.